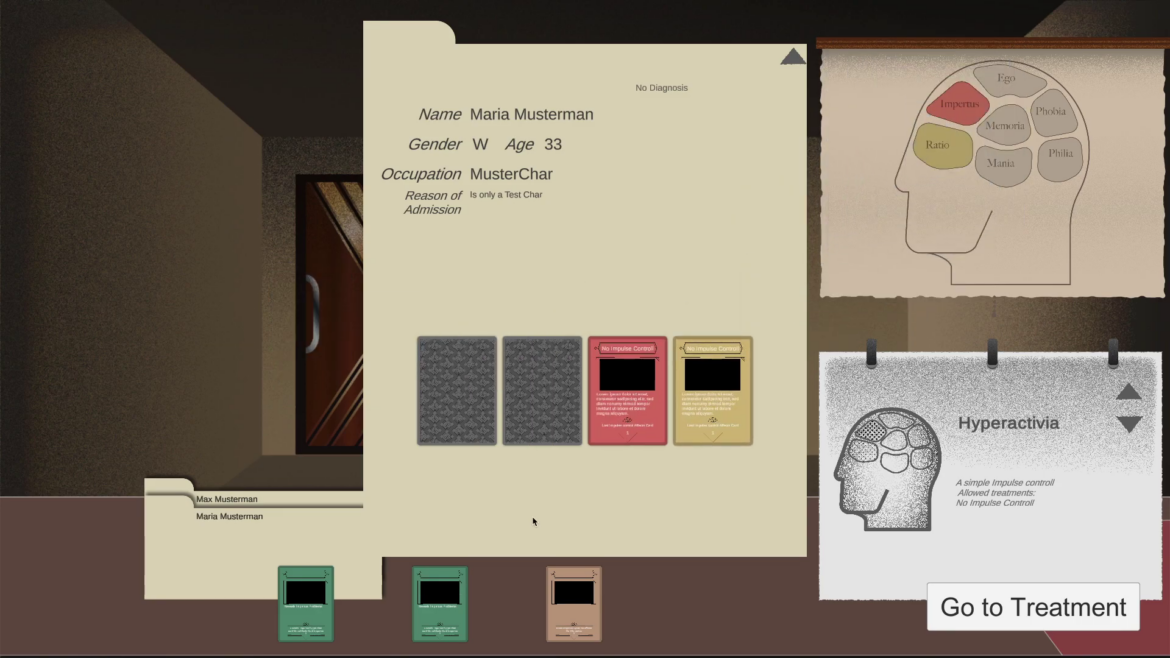 Dev Diary 1 Inspiration and early phases of the project

Thriller, Horror …an adventure through a fictional version of early 20th century mental care and pseudo-science. The game is a card-based workplace adventure. You take the role of a mysterious, fraudulent doctor who got a position in the prestigious St. Anity sanatorium in order to free your aunt Patty who has been placed there by your greedy cousins

Mental asylums and evil doctors have always been a trope in movies and video games, but have you ever asked yourself what you would do in their place?

During your time in the Sanatorium, you’ll have to diagnose patients and order treatments on them. The game uses cards to represent symptoms and treatments. By diagnosing and treating the mysterious ills of your patients, the game tries to emulate being a psychiatrist in the early 20th Century.

The gameplay is a unique hybrid of card game and adventure, each patient is a small puzzle.

Development of Sanatorium initially started in early 2020 as a bachelor project at the Zurich University of the Arts (ZHdK).

I was inspired by job role playing games like Papers Please by Lucas Pope. In Papers Please, the primary goal was not to accurately simulate the profession (beeing a passport guard), but to recreate the feeling and atmosphere of doing that job in a repressive state like East Grestin, the fictional home country in the game. Thanks to this experience, I was interested in creating mechanisms that are able to convey dull, daily business in an interesting and fun way.

Clinics often deal with massive amounts of paperwork so I quickly came up with the idea of cards and patient files as in game objects. The recent renaissance of deck builders also motivated me to try something in the same vein, but still a little different. The first step in development was also a paper based prototype. Due to the games card based nature, this came naturally and was easy to create. Some of my friends at university were my first guinea pigs.

In spring 2020 when Corona first started to become serious in Switzerland, I was actually able to make a lot of progress in the project since I was able to really focus without distraction. As bad as that time was, at least some good came out of it. In the Summer of 2020, I was able to graduate and receive my bachelors degree by submitting an early prototype of Sanatorium. The rest of the year, I spent mainly refining and refactoring code. At that point, I already knew that I wanted to continue working on the project.

In the next Dev Diary entry, I will go into more detail about the unique artstyle of the game. Stay tuned!